A week before IMG Academy’s first game of the season, Bobby Acosta slowly walked around the football field, thinking about how far he and his team had come the past few months.

Alone with his thoughts, Acosta, IMG’s new head football coach, was moved to tears as he prodded across the turf, thinking how far his team had come to be able to take the field on Friday and actually play football.

Acosta knew there would be challenges when he accepted the coaching position on Jan. 30. The Bradenton, Florida, boarding school brings in some of the top football recruits from across the country to form its national team, traveling nationwide in a highly competitive schedule. But he never could have imagined what would lie ahead once the coronavirus pandemic hit.

“I took the job, we started off really embracing our new vision, our new philosophy,” Acosta said. “The kids bought in quickly, and then we went off for spring break on March 13, and that was the last time we saw the kids for months.”

Acosta had experience at the college level, coaching at Syracuse, Bucknell and Cornell, but none of those stops truly prepared him for the months ahead. To make it to football season, the school completely overhauled its safety protocols to keep 140 football players from every corner of the country safe once they were on campus. And as a program, IMG has returned no positive cases and had just two injuries and a few reports of a stomach bug unrelated to COVID-19.

With a new coach, the players knew little about what the offense or defense would look like, let alone what would happen to their season. The administration and coaching staff came up with a four-week virtual learning program that included a virtual classroom and virtual practice field. The players all bought in.

The four-week program included position meetings all held via video conferencing. The team practiced online while Acosta read the script for plays while his athletes tried to learn while watching a screen.

“The kids performed it at their house, in their backyard. Some kids didn’t have equipment, so they’d use a shoebox as the ball,” Acosta said. “It started as four weeks and then went to eight weeks. I think it ended up being 12 weeks until we were ready for the kids to come back.” 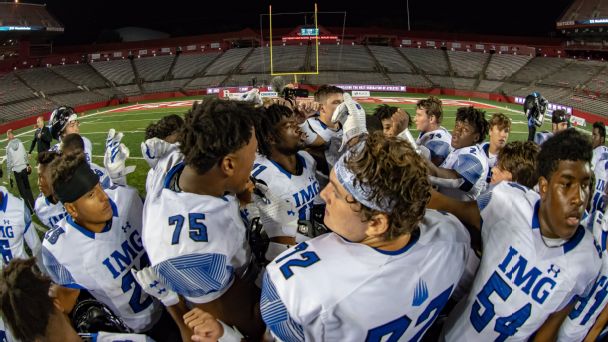 IMG Academy, which rosters seven ESPN 300 prospects, kicks off its 2020 football season when it faces Venice (Florida) High School on Friday at 8 p.m. ET on ESPNU.

The team and coaches adjusted to having to communicate virtually throughout the spring and into the summer, but the real test came when the athletes had to come back to campus.

IMG is the home to multiple sports teams, not just football, so it needed to figure out a way to bring everyone back safely and ensure that safety once they returned to campus.

The coaches went through the protocols and simulated how a return could work so the academy could make adjustments before the players were set to come back in July.

Many parents from across the country wondered if it was still a good decision to send their sons away to the hot-spot state of Florida. They couldn’t see how IMG’s plans would work in person, so it was up to the coaches to detail that process.

“I was on the phone maybe two days before the kids were arriving with parents saying, ‘Are you sure, Coach? Is everything safe?'” Acosta said. “I said, ‘Moms and dads, I would bring my own kids here because it’s safe,’ and a week later my kids did come down. I said if I can bring my own kids here, it’s safe.”

Offensive lineman Greg Crippen, who is going into his third season at IMG, quarantined himself for two weeks before he arrived on campus on July 7. And when he was there, the difference was noticeable.

The past two years, he and his family were allowed to go into the dorms to drop him off and help him settle in. This year, his family was allowed to only go up to buildings and dorms, not inside. They brought his belongings to the door, said goodbye and hoped for safety.

The same went for Crippen’s roommate, fellow offensive lineman Tyler Booker. He and his family took the same precautionary measures, and according to his father, William, the family made sure they had masks on every step of the way until Tyler arrived at IMG. William even kept Tyler in their hotel room before drop off and went to the grocery store by himself just to make sure Tyler wasn’t exposed to anyone before he arrived in July, as well.

“When I dropped him off, I dropped him off at the curb and they had carts for them because they didn’t want parents going into the building,” William said. “They had everything locked down, they were really big on wanting these kids to be safe and making sure nobody is going to get sick.”

IMG is affiliated with Johns Hopkins All Children’s Hospital, and the school has a health services building on campus with full access to Johns Hopkins nurses. Each student-athlete who came on campus in July went through a screening process for COVID-19 symptoms, and they are screened every night. (If someone displays symptoms, they are brought to Johns Hopkins health services and tested.) After the initial screening, the players checked into the dorms and were assigned a roommate, two athletes to a room.

In the past, players could pick their roommate. But as part of the new protocols the school is keeping the players in pods, or groups, associated with their position. The offensive linemen stayed in a pod with other offensive linemen, quarterbacks with quarterbacks, and so on.

Those pods aren’t just for living arrangements, either. When the players go to team meetings, they are separated by pods. When they eat, they go with their pod. The team is separated by two floors in the dorms, and players aren’t allowed to go to the opposite floor their pod lives on.

“All the quarterbacks are with the quarterbacks just in case there is something like a stomach flu, or someone shows symptoms, they’ll just separate the quarterbacks from everyone else,” quarterback J.J. McCarthy said. “We’re trying our best because we’re all 15- to 18-year-old kids, so it’s hard not to connect with one another closely, but we’re trying to do the best we can.”

“When I dropped him off, I dropped him off at the curb and they had carts for them because they didn’t want parents going into the building. They had everything locked down, they were really big on wanting these kids to be safe and making sure nobody is going to get sick.”

To help his players follow those protocols and make sure everyone was taking them seriously, Acosta stayed in the dorms himself to show his players how serious it was. If they wanted a season to happen, they needed to follow the steps to make it happen.

For the first few weeks back on campus, parents weren’t allowed on and students weren’t allowed off. While it can’t create a true bubble since some staff members live off campus and go home each night, it’s as close to a bubble as they can make it to ensure there was no outside exposure to the athletes.

“My wife and I used Wal-Mart to ship [Greg] stuff, because they do need extra water, chips and snacks,” Greg Crippen’s father, Tom, said. “Unless you want to go to their school store, we usually ship them stuff because the cafeteria closes after 6 or 7 o’clock, so after that he has to have something.”

Parents are now allowed to check their children off campus, but still have to remain outside the buildings if they pick them up.

That initial few weeks of getting adjusted to the new way of life — practicing with masks on, social distancing in practice and the dorms, and the anxiety of hoping everyone was staying safe — weighed on the athletes. It was a lot more than they were used to and they didn’t have their parents to rely on.

But because they were staying within their pods, going through it together, the players felt a stronger sense of community and brotherhood. They are working together as a team off the field to make sure they can play on the field, and it has brought them closer together.

“Our day is starting to get a little bit more normal because the whole team is on campus, so there’s not many scares with people having the virus now,” Booker said. “We’re past that two-week period, so I don’t want to say things are more relaxed, but we’re getting used to it more.”

Now the players are socially distancing by themselves without a coach’s reminder. When their helmets come off in practice, they pull up their masks or neck gaiters to make sure their face is covered. It has almost become a part of their uniform now as they have formed the habit of keeping their masks nearby.

All of that work — the screening, the pods, the safety measures — are to ensure they make it to the season. McCarthy, who originally is from Illinois and in his first season at IMG, wanted to make sure the stress of leaving his family, attending IMG and putting himself through such stringent safety measures, wasn’t going to be for naught.

There were some doubts about whether or not they would get to play this season, mostly coming from decisions out of their control from the state. Then there were questions about how they would work through their schedule. They have away games in Texas, Tennessee and Friday’s season opener at Venice High School in Venice, Florida, a little less than an hour drive from IMG’s campus.

The team will drive in three buses to Venice and will try to do the same to Tennessee, when the team plays Ravenwood in Brentwood. They will have to fly, however, to Texas for the game against Duncanville on Oct. 10, which will provide some extra challenges to keep the team safe.

Getting to this season opener doesn’t mean they’re out of the woods or they can relax, though. The players know there is still a tough road ahead to get through the season without any issues. And they all hope the sacrifices will be worth it.

“What I tell our kids is that every week is a championship week. This thing could halt us at any time of the year, so take this first game, embrace it and let’s really sell out because you don’t know if you’re going to get next week,” Acosta said. “When we wake up tomorrow, we’re blessed to have that day and we’re going to win that day. A couple months ago, we had people tell us there’s no way you’re going to have over 100 kids on a team and make it to a season, and we did it.”

In a season with fewer Power 5 teams, can schools in the Group of 5 still win big?