As we move into the second round of the 2020 NBA playoffs, Sunday brings the first postseason matchup between the Boston Celtics and the Toronto Raptors (ESPN and the ESPN app, 1 p.m. ET).

We asked our experts what they’ll be watching for and who will win each series, as well as who they are picking for the NBA championship now.

1. What intrigues you most about the Celtics-Raptors series?

Tim Bontemps: That it is finally happening! For years, these two teams have been at or near the top of the East yet have never met in the postseason. It has been a topic of discussion on both sides throughout the season — particularly after it became clear before the season shut down in March that this second-round showdown was a very real possibility. Two deep, versatile rosters with strong coaching should lead to a very compelling matchup. 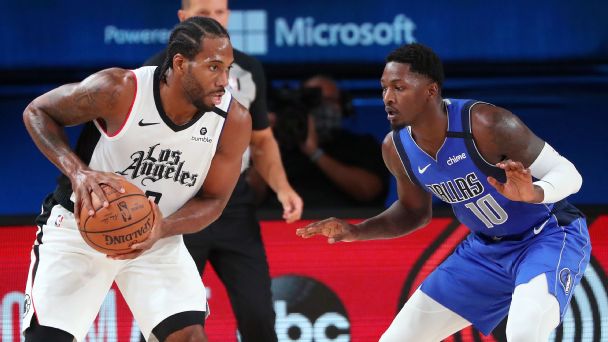 Andrew Lopez: In Toronto’s 12 games since the restart, the Celtics are the only team to beat the Raptors. What I’ll be watching most is the frontcourt matchup: How does Boston handle Marc Gasol, Pascal Siakam and Serge Ibaka? Also, can Jayson Tatum stay hot against whatever defense Nick Nurse has planned for him?

André Snellings: Celtics-Raptors should be one of the most competitive matchups of the playoffs. Both teams are peaking at the right time, and they’re built as the inverse of each other: Raptors are best at the point and in the paint with the Celtics dominant on the wings. Also, two of the best defenses in the NBA should make for a slugfest.

Eric Woodyard: Two teams with the same goals, but coming from different directions. The Raptors are the champs but are fighting for respect after Kawhi Leonard‘s departure. The Celtics are younger and trying to reach the heights Toronto did last season.

Kevin Pelton: Whether Toronto can score consistently against a quality defense. The Raptors feasted against weak defenses but struggled against strong ones, posting a subpar 104.8 offensive rating against the league’s other top-10 defenses (a group that includes Boston). Meanwhile, the Celtics were second best in the league against top-10 defenses with a 109.9 offensive rating.

2. What intrigues you most about the Heat-Bucks series?

Snellings: The Bucks were the most dominant team in the NBA this season, but the Heat had their number when they faced off. Bam Adebayo looks like one of the toughest matchups for Giannis Antetokounmpo, and I can’t wait to see whether he can step up his game to a championship level to overcome a nemesis.

Lopez: It has to be Giannis vs. Bam, right? Adebayo has defended 28 shots against Antetokounmpo this season, according to NBA Advanced Stats, and the reigning MVP went 12-of-28, including 0-of-7 from deep on those shots. Antetokounmpo’s worst game this season (using Basketball Reference’s game score) was his 6-of-18 shooting performance in a 16-point loss to Miami on March 2.

Bontemps: How will Milwaukee handle a real challenge? The Bucks were uninspired during the seeding games, and not much better during their five-game series win over the Orlando Magic. Miami beat Milwaukee twice before the season shut down, then was up big without Jimmy Butler and Goran Dragic during the seeding games before fading in the second half. Can the Heat replicate that success in this series?

Woodyard: The Heat have been one of the few teams to have regular-season success against the Bucks and are aren’t scared at all. The Bucks have, let’s be honest, looked vulnerable at times since the NBA restart. Maybe Milwaukee can kick it up another gear, though.

Pelton: Miami’s ability to generate a high volume of 3-point opportunities for its accurate shooters. Despite starting multiple non-shooters, the Heat finished second in the league at 38% from beyond the arc. Up against a Milwaukee defense that will concede 3s to protect the rim, Miami could do damage from long distance.

3. Celtics vs. Raptors: Who’s your pick?

Lopez: Raptors in 7. Boston will be without Gordon Hayward for the series and Toronto is likely to have Kyle Lowry available for Game 1. The X factor here could be Toronto’s Fred VanVleet, who led the team in scoring in the first round. That and the Raptors’ championship pedigree sneak them through.

Bontemps: Raptors in 6. Hayward’s loss is devastating because the Celtics lose one of their best passers, a quality shooter and a versatile defender, but also because it further exposes Boston’s suspect depth behind their four remaining elite perimeter players. Toronto’s bench, led by Norman Powell and Serge Ibaka, should prove to be the difference in what could be the most entertaining series, from a basketball junkie perspective, of these entire playoffs.

Woodyard: Celtics in 6. Not many teams can lose a superstar like Leonard and put together such an amazing season, with Coach of the Year Nick Nurse guiding the ship for Toronto. But the elite scoring and playmaking of Tatum, Jaylen Brown and Kemba Walker will get the Celtics over the hump. They’re just too talented.

Snellings: Raptors in 7. The Raptors have been the hottest team in the NBA, but their worst recent loss was a blowout at the hands of the Celtics — who are dangerous, particularly with Tatum, Brown and Walker all capable of going off. But the Raptors are the better defensive team, they have more balance and depth, and their championship experience and confidence should be the tiebreaker.

Pelton: Raptors in 7. Whichever team wins this series, it’s going to seem obvious in hindsight — the Celtics because of the Raptors’ aforementioned issues against elite defenses, or Toronto because Boston’s depth became a major issue with Hayward on the sidelines. Ultimately, I lean toward the latter concern being slightly more important.

Pelton: Bucks in 6. Between their shooting and the big, athletic defenders they can throw at Giannis, I think the Heat can make this an interesting series. But I expect Milwaukee to eventually unlock that puzzle and return to the conference finals.

Snellings: Bucks in 5. The Heat are tough, but if the Bucks are at their best, they should be able to win convincingly. The Bucks were slow to start in the bubble, and it’s not clear whether they’ve found their level or not. A similar slow start against a team like the Heat could lead to a loss or two, but ultimately I expect the Bucks to rise and advance.

Woodyard: Bucks in 7. Yes, Miami beat them twice in the regular season, but I think this Bucks team will be ready to play. The whole team, including reigning MVP Giannis Antetokounmpo, is on a mission and has a lot to play for and a chance to do what it couldn’t do last season.

Lopez: Bucks in 6. Milwaukee will let you shoot 3-pointers, and Miami knocked down 39.1% of their attempts in the first round. The Bucks allowed Orlando to shoot 37.7% from deep. If Miami can slow down Antetokounmpo again and knock down 3s, it has a chance. But after bringing the playoffs to a brief halt, Milwaukee seems as motivated as ever.

Bontemps: I’m going to put a bit of a qualifier on this — if Jimmy Butler’s left arm is working, I’m picking the Heat to win this series in six games. The Heat have looked great in Orlando and have the roster — with physical, versatile defenders to throw at Antetokounmpo and plenty of 3-point shooters — that gives Milwaukee problems. I also will take Erik Spoelstra over Mike Budenholzer. Assuming Butler is right, I like Miami to pull off the upset.

5. Have the playoffs changed your view on who will win the NBA title?

Bontemps: No. I came into the season thinking the LA Clippers had the best team in the league. Although they have had a disjointed run through the seeding games and in the first round, I still feel confident the Clippers are the best team. But the East is far more wide open than I thought it would be. Between the mediocre showing the Bucks have had and how impressive Toronto, Boston and Miami have looked, these final two rounds of the East playoffs should be fascinating to watch.

The NBA playoffs have arrived! With the seeding games and Western Conference play-in complete, 16 teams are set to compete for the NBA championship at the ESPN Wide World of Sports Complex.

• 5-on-5: Fact or fiction for Game 2s
• How refs are dealing with bubble ball
• Everything to know about the playoffs
• Experts’ picks for all eight series

Woodyard: The playoffs have changed my view, to be honest. I originally picked the Clippers, but given how many difficulties they’ve had, I now believe the Lakers will pull it off. I’m not counting out the Bucks, though.

Lopez: Not yet, but the postseason has made me realize that teams don’t seem to be able to flip the switch as easily as they could’ve done in front of their home crowds. I had the Bucks beating the Lakers in the Finals, and both teams stumbled in their opening playoff games.

Snellings: No. Coming in, I felt the Bucks had the best chance, followed by whoever is left standing between the Lakers and Rockets, with the Raptors and Clippers as the next tier down. I still feel this way, as the Rockets and Lakers have overcome perimeter injuries and stepped up while the Bucks still look like the class of the East as they get warmed up.

Pelton: The playoffs haven’t changed my pick (the Clippers), but I do think we’ve seen teams outside the top three favorites (the two L.A. squads and Milwaukee) play well enough that I’m less convinced now that one of those three teams will win the championship.